Acme lead screws have a 29 degree thread angle. An Acme lead screw is less efficient than a square thread, but is easier to machine.

The lost motion or looseness (play) between the balls in the nut and the threads on the screw. In the case of ball screws, it refers to how much the ballnut can be moved back and forth without moving along the length of the screw.

Get a free repair evaluation to refurbish or rebuild your ball screw at a faction of the cost of a new ball screw. Contact us today: (800) 298-2066 or sales@dynatect.com.

What is a Ball Screw?

Video: What is a Ball Screw [Watch on YouTube]

A ball screw is a mechanical device that translates rotational motion to linear motion.  Ball screws are typically 90% efficient at converting input torque to thrust.  Compared to lead screws, ball screws are generally more bulky, because of the need to have a mechanism to re-circulate the balls.  Typically, their design allows for multiple repair options to extend the life of the ball screw without full replacement.

A form of mechanical damage in which metal is displaced or upset without attrition. It is a permanent deformation of the ball track. Brinelling usually results from excessive load. This is an indication of material surface fatigue, usually indicating the end of life, may be able to be removed with regrind option depending on amount/depth.  If the ball screw has not reached its expected life, this may be a sign of overload or an indication that the ball screw is experiencing radial loads.

The closed path of recirculating balls in a nut.

A load that would tend to buckle or compress the ball screw shaft.

The angular velocity at which the screw (or nut) develops severe vibrations. Learn more in design resources section.

The complete forward and reverse motion of the screw (or nut) in moving the load.

The range through which a nut can be turned without engaging the balls.

The maximum load that a ball screw assembly can maintain for a prescribed length of travel.

A condition whereby excessive friction between high spots results in localized welding with subsequent splitting and a further roughening of rubbing surfaces of one or both of two mating parts. This is an indication of material surface fatigue, usually indicating the end of life, may be able to be removed with regrind option depending on amount/depth.

Lead is the amount of linear advance caused by one revolution of the leadscrew (lead = 1/Pitch).

The useful life of a ball screw assembly, usually given in terms of one million inches of travel. Learn more in design resources section.

A ball that carries a portion of the load force (see Spacer Ball).

A screw with more than one lead or start. Ball screws and Acme screws can have multiple starts.

The diameter of a theoretical cylinder passing through the centers of the ball bearings.

The minor diameter of the screw shaft measured at the root of the ball grooves.

A nut containing only one closed recirculating path.

A smaller ball, used as an idler, which prevents friction between load balls, but does not carry a load itself.

The maximum non-operating load capacity at which brinelling of the ball track or plastic deformation of the balls will not occur.

Determined primarily by the number and size of balls in engagement and, to a certain extent, by the preload and type of nut mounting.

A load that would tend to stretch the ball shaft. 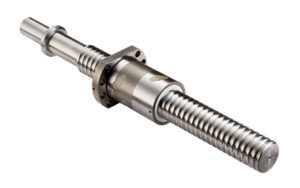 How Can We Help?

Use our contact page to get in touch with us directly for placing an order, requesting a quote, or getting your products repaired.

Want to speak with our experts?